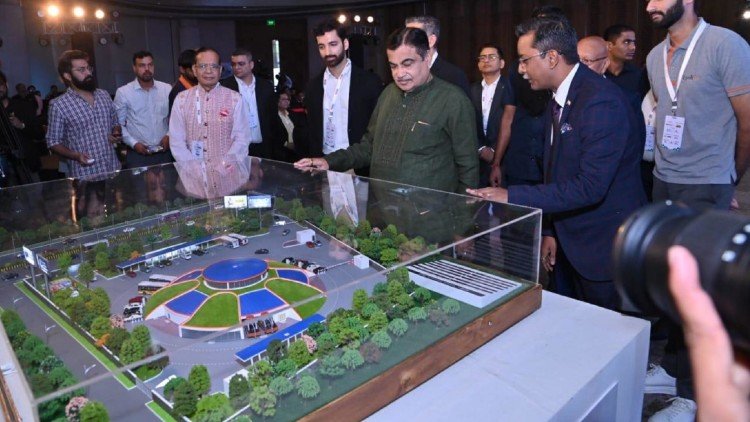 In a first, Union Minister of Road Transport & Highway Nitin Gadkari unveiled the miniature of the state-of-the-art EV charging station conceptualized by the National Highways for EV (NHEV). The NHEV miniature model of the charging station is the first ever such model in the industry which has been conceptualized as a comprehensive wayside amenities plaza that can reimagine and replace the existing traditional petrol pumps and wayside amenities on the highways. This comes as a successor to the initiative of EODB which strives at upgrading 5000 km of national highways to E-highways through its pilot project called the National Highway for EV.

The pilot project is currently conducting its concluding phase of technical and commercial trials with buses and long-range electric SUVs on the Delhi-Jaipur stretch from September 9. This would add a 278 km stretch to the previously conducted 210 km TECH-trial run between Delhi-Agra in 2021 to accomplish technical trials of a total of 500 km across four states — UP, Delhi, Haryana, and Rajasthan — in its pilot phase.

During the inaugural address, Nitin Gadkari said “Since the last 3-4 years I have been talking about electric vehicles and have been answering many questions like what would happen if we break down with an electric vehicle? However it didn’t happen and with a gradual increase in confidence, the technology questions got answered. Now there are waiting lists for electric cars and scooters and I can say that electric is the fuel of the future. Currently, electric double-decker AC bus costs are coming to Rs. 60 per km, non AC Rs. 39 per kilometer and for normal electric AC bus Rs. 41 per km and diesel bus is costing Rs. 115 per km. If you can bring business class comfort in an electric bus with a trolley on economical ticket cost to passengers, it will make public transportation more competent for users”.

“The pilot has already covered a 10% stretch between Agra-Delhi-Jaipur in two phases, out of its total 5000 km highways that India aims to upgrade as E-highways in the next 2 years. The NHEV team is slating its plan to install pre-fabricated modules of these stations’ electrical and structural infra, soon after commissioning its pilot phase. So that new stations in the expansion phase can be speedily installed within 90 days from their allocations.” said National Program Director, Ease of Doing Business Abhijeet Sinha, also Project Director NHEV at EODB Services.