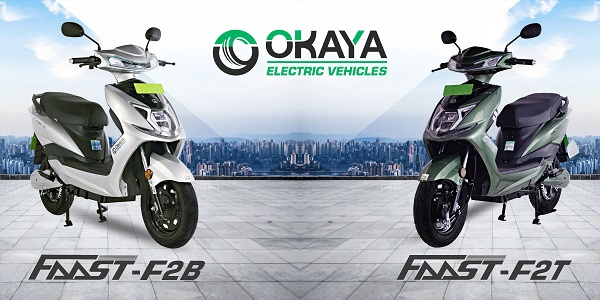 Okaya EV, India’s fastest-growing electric two-wheeler brand, keeping up with its promise of delivering a wide range of e-scooters announces the launch of 2 new variants of Faast: India’s highest-range in-class e-scooter. The new variants called Faast F2B, and F2T were launched at the onset of the festive season as consumers flock to take deliveries of new vehicles.

The new variants: Faast F2B and F2T are launched at INR 89,999 and INR 84,999 respectively, thus adding to Okaya’s spectrum and offering at multiple price points. Keeping the performance parameters in line and unchanged from its flagship model, Faast F4 the F2B & F2T delivers a power-packed ride with a top speed of 70 Kmph via its 2000W motor while the mileage stands at 85 km per charge for F2T and 70-80 km per charge for the F2B variant.

Both variants come with a 2.2kWh LFP Battery. The F2B comes with the battery packed neatly under its floorboard thus giving users a large boot space, while the F2T offers the users the benefit of battery portability with its battery placed under the rider’s seat.

Okaya e-Scooters are available across India via its 550+ exclusive outlets with a full range of E2Ws ranging between INR 74,999 for its Low-Speed vehicles to INR 109,000 for its flagship High-Speed Faast F4 which delivers 140-160 km to the charge.

Additionally, consumers can now get a chance to win exciting gifts on buying any Okaya e-Scooter such as cars, laptops, TVs, cash rewards, and much more under its festive scheme valid till 31st October 2022.