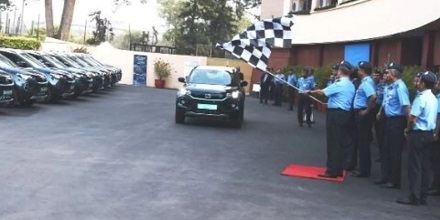 Indian Air Force on Tuesday inducted a fleet of Tata Nexon electric vehicles, keeping with the government’s initiative on introduction of green mobility. A flag-off ceremony was held at Air Force Headquarters where Chief of Air Staff, Air Chief Marshal VR Chaudhari flagged off the first batch of 12 electric vehicles.

“Indian Air Force is planning to enhance the usage of electric vehicles in a progressive manner by procuring e-vehicles against downgraded conventional vehicles. Augmentation of the e-vehicles ecosystem, including installation of charging infrastructure at various Air Force bases, is also planned,” said the Ministry of Defence in a press release.

The first batch of electric cars introduced will be deployed in Delhi NCR units for performance monitoring and analysis.

“To create a standardized inventory of vehicles, IAF has already joined hands with Indian Army in the ongoing procurement of Electric Buses and Electric Cars. These proactive measures reaffirm IAF’s commitment to the National objective of transformation towards environment friendly mobility,” the ministry added.

On 8 November, 2022, the Air Chief Marshal had said that the Indian Air Force’s inventory required four or five squadrons of 4.5 generation aircraft. “There’s no doubt that air power is critical in deciding the outcomes of conflicts.”

The Chief also participated in a joint exercise between the IAF and the French air force at the Jodhpur air force station in Rajasthan. He flew in a Rafale fighter jet, while Stéphane Mille, chief of staff of the French Air and Space Force (FASF), flew a Sukhoi Su-30.