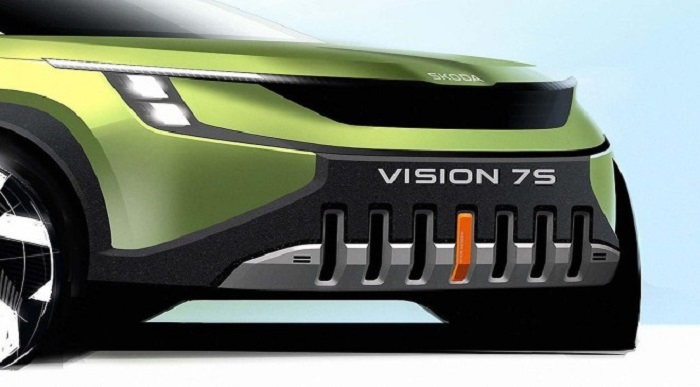 As the Czech car manufacturer Skoda Auto moves ahead with its Next Level Skoda Strategy 2030, it has unveiled the VISION 7S concept embodying the brand’s latest design language ‘Modern Solid’.

The VISION 7S concept features the Tech-Deck Face at the front end a solid underbody and aerodynamic roof lines along with ‘T’ design headlights and tail lamps. Interestingly the concept also features the brand’s new logo.

Speaking of the interior, Skoda Auto noted that the vehicle is a 6+1 seater rather than a seven-seater as a dedicated child seat is fixed onto the center of the second row. Alongside, the interior also features a free-standing touchscreen with a haptic key and redesigned menu and infotainment functions.

With a planned investment of €5.6 billion for the next five years, the company aims to bring out three grounds up BEV which includes a small BEV, a BEV compact SUV, and a BEV 7-seater by 2026. A press release from Skoda Auto noted that the VISION 7S concept study, with its claimed range of over 600 kilometers and peak charging rate of 200 kW, offers a specific preview of the seven-seater electric SUV.

Moreover, Skoda Auto also plans to add BEV models for its ICE range of vehicles starting with the Superb in 2023, followed by the Kodaiq and Octavia in the second half of 2023  and 2024 respectively. The company also aims to reduce its CO2 fleet emission by more than 50% by 2030 as compared to 2020, he added.

Alongside giving a glimpse of its future mobility product, Skoda Auto also showcased its new brand logo which is slated to be first introduced in information and communication materials, followed by future models.

Meanwhile, he added that with the new logo, the company also aims to change its brand identity as it plans to differentiate itself from the other brands of the VW group. The CEO said that Skoda Auto wants to grow outside the VW group and doesn’t want to eat up market share from its sister brands.