Vehicle-to-Grid Technology and its Applications 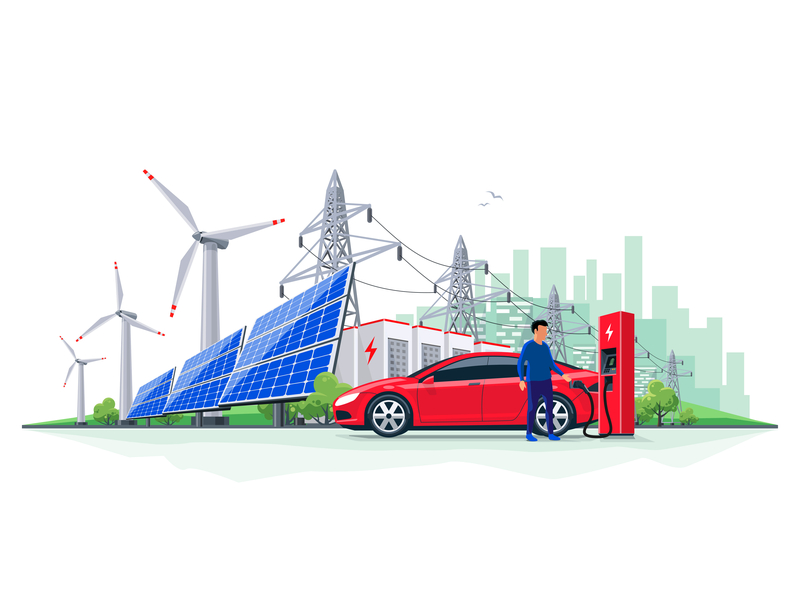 Transitioning our transportation infrastructure to a fully electric model is an urgent task. Yet it places unprecedented demand on our electrical grid. Just to drive 100 miles, the average electric vehicle (EV) uses the same amount of electricity that it takes to power a typical U.S. home for a day.

According to a study by the U.S. Department of Energy (DOE), the growing demand from plug-in electric vehicles and many other technologies that require electricity could increase the load on our power grids by up to 38% by 2050. Power companies and government agencies are working hard to meet this demand, but it’s a challenging task.

But what if electric vehicles can be part of the solution to this problem? That’s exactly the idea behind vehicle-to-grid technology, which is an important component of our transition to a fully electric transportation sector.

What Is Vehicle-to-Grid Technology?

Vehicle-to-grid, or V2G, technology is smart charging tech that allows car batteries to give back to the power grid. In essence, it treats these high-capacity batteries as not only tools to power EVs but backup storage cells for the electrical grid.

This type of setup uses bidirectional charging stations to push and pull energy to and from connected vehicles based on the demand for electricity at any given time. It’s part of a larger initiative known as vehicle-grid integration. This extra energy can be used to power houses, buildings and ultimately anything connected to the power grid.

How Does V2G Work?

Although the basic concept of V2G charging sounds simple enough, implementing it requires a complex suite of smart technology. Charging stations must be equipped with software that communicates with the central grid to assess overall system demand at any given time.

That software is based on simple technology that has been around for a while now — think about the power companies that have been offering off-peak usage rates for years. But V2G tech moves beyond merely assessing peak demand and encouraging consumption at off-peak hours to actually pulling in additional energy from connected vehicles when needed.

Pecan Street, a transportation electrification and V2G research organization that works with power companies to implement this technology, estimates that one plug-in electric vehicle can power a single home for two to five hours, or five homes for around an hour. All it takes is V2G technology.

Why V2G Is Important

There are many benefits to implementing vehicle-to-grid technology, but let’s look at the three most significant ones.

Although the increased electrical demand generated by EVs is an issue, the real challenge lies in how that demand ebbs and flows throughout the day. If most EV drivers are plugged in during work hours — the same time when energy demands for heating and cooling, business needs, and more are at their highest — the system can easily get overloaded.

As mentioned before, one solution for this issue has been for power companies to incentivize customers with lower rates for using power at off-peak times. This balances out demand and eases the strain on the system. With V2G technology, though, companies can expand their capacity to meet peak demand.

This expanded, bidirectional grid offers a more efficient model for power distribution. For instance, one study found that without any V2G infrastructure, introducing 1 million EVs in the Guangzhou region in China would reduce the difference between peak and valley load times by 43%. With V2G in place, that reduction would increase to 50%.

Renewable energy sources such as wind and solar play a critical role in a sustainable economy. However, these sources are intermittent and inconsistent. An efficient power grid must be able to capture energy from them when it’s available and store it for distribution when it’s needed.

While existing systems can store up renewable energy as it comes in, a surge in energy — say, high winds — can mean that the system storage capacity maxes out, thus missing out on valuable energy. Expanded storage through connected EV batteries provides more room to capture this valuable energy.

All of the above benefits lead to another: cost stability. Much of the price volatility for utilities comes down to simple supply and demand. The more strain there is on the system, the more it can drive up costs. When energy supply is better able to balance and meet demand, it creates price stability.

For instance, one case study found that a single V2G charger could potentially save the company that installed it up to $1,900 annually in utility bills. The Colorado Energy Office has estimated that with a V2G system, each EV would create $600 over its lifetime in benefits to utility ratepayers.

Despite these benefits, there’s a long way to go before we have a reliable bidirectional EV charging infrastructure in place. Most existing vehicles and charging stations are unidirectional, so converting will take significant investment.

There is also no consistent set of regulations for vehicle-grid integration — every state has its own mix of rules or lack thereof. This makes a nationwide rollout of such technology difficult. Further, there is a lack of clear incentives in place for household and business customers to convert to smarter charging systems.

To effectively transition to a truly integrated vehicle-grid system, addressing these obstacles must be a top priority.

Electric vehicles and EV charging stations are already generating a significant return on investment for consumers, businesses and the economy as a whole. Vehicle-to-grid technology takes this investment and its potential payback to the next level. Implementing it is critical for accelerating our electric-vehicle transition on a global scale.