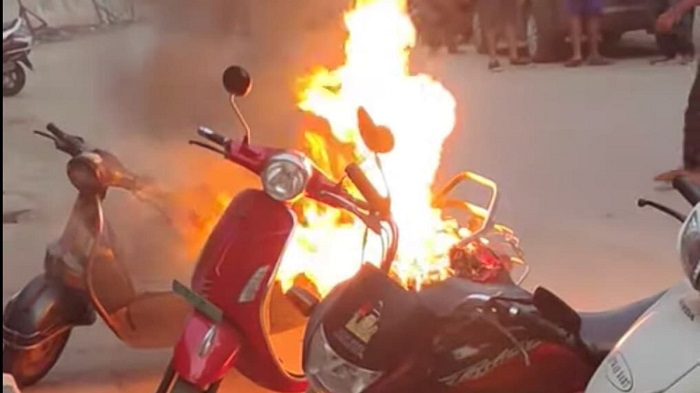 An unfortunate incident took place in Maharashtra’s Palghar, where a 7-year-old child died as an electric scooter battery exploded while charging at home. The boy breathed his last during treatment today after getting critically injured in an e-scooter blast that occurred while it was getting charged in Vasai, Palghar. “Case registered; further investigation initiated,” Manikpur Police Station stated.

The 7-year-old boy, Shabbir Ansari, died after sustaining over 70 percent burns when an electric scooter’s battery exploded at his home. Ansari and his grandmother were sleeping in the hall when the explosion took place. Ansari’s father plugged in the EV battery for charging and woke up to shock as the battery exploded. The EV battery fire incident took place at around 4:30 am on September 23. The grandmother suffered minor injuries while Ansari had over 70 percent burns and was rushed to hospital whee he breathed his last.

The media reports further claim that it was a detachable 24 Ah Lithium Ferro Phosphate (LFP) battery, and is believed that it exploded due to overheating. However, Ansari’s family blames EV scooter manufacturers for the ‘faulty’ batteries.

India has been witnessing electric scooter battery fires since the onset of 2022. A few months ago, an EV fire occurred in Andhra Pradesh, where the battery of an electric two-wheeler detonated in a house, killing one person and injuring three others. The event occurred in Vijayawada when the detachable battery of the vehicle was kept on charging in his bedroom and it suddenly exploded in the early hours when all were fast asleep.