More
HomeTechnologyAutonomous DrivingIs Automotive Ethernet Throwing CAN Under the Bus?

Is Automotive Ethernet Throwing CAN Under the Bus? 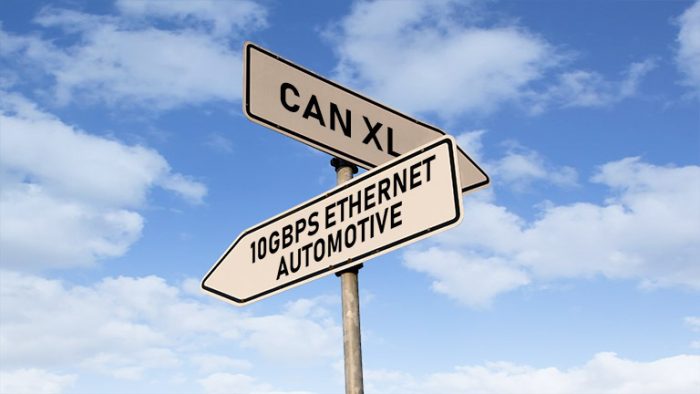 One of the greatest challenges facing automakers is how to accommodate the increasing electronic content in their vehicles. The most vexing questions are how to handle the amount of data these devices generate and how quickly a communications bus can transfer this data. Since 1991, the primary means has been the Controller Area Network (CAN) bus, and every vehicle on the road today relies on it.

When the CAN bus was first conceived nearly four decades ago, vehicles did not have infotainment and navigation systems, or cameras, radar and other types of sensors. Data rates on the earliest version of CAN were minimal, about 150 Kb/s, which satisfied the needs of the devices it served. Over the years, the number of these devices — along with their need for high data rates — increased, and today’s vehicles have upwards of 80 electronic control units (ECUs) per vehicle. Every time designers accommodate a new device, another ECU is added to serve it. The result is today’s large, heavy wiring harnesses that collectively represent the third heaviest part of a vehicle.

Obviously, the need to move data at speeds 100 to 1,000 faster using a more coherent approach places the CAN bus in the industry’s crosshairs, and the industry is focusing on Ethernet to provide them. The choice is hardly surprising, as Ethernet is ubiquitous and well understood. It has become less expensive while also providing a data-rate roadmap to multi-gigabit speeds that are already required by the features in some luxury vehicles and will be needed in every vehicle in a decade.

Replacing a bus structure that has served the industry well for so long would be insanely difficult, not just because it is so entrenched but also because CAN still does its job well for the purposes it was intended. In fact, there is arguably no need to replace it, at least for some time, because CAN evolved over the years to be more competent than ever, increasing its maximum data rate to 10 Mb/s and adding new features along the way.

With data transmission speeds of up to 10 Mbit/s, Controller Area Network-Flexible Data Rate (CAN-FD) closes the gap between what CAN delivers and 100-Mbit Ethernet (100BASE-T1). It supports native multicast and broadcast, provides built-in frame prioritization and non-destructive collision resolution, and easily supports long cable runs, although as more devices connect to the same bus, performance degrades. To deal with this, automakers add more CAN buses to vehicles, with some current models hosting more than 10. CAN-FD and CAN-XL improve CAN by supporting higher data rates, faster line rates and larger frame sizes. CAN-FD is already being used in vehicles and CAN-XL is near release.

So, the issue is not a matter of which interface standard is best because CAN and Ethernet both are, but for different applications. That is, the CAN bus remains well suited for low-speed control applications where cost is critical, while complex electronic systems that require huge bandwidths require a much faster bus like Ethernet. And where the highest bandwidth and lowest latency are required, there is also Flat Panel Display Link (FPD-Link), Media Oriented System Transport (MOST) and Flex Ray that have their own benefits for specific vehicle functions.

With so many bus structures in play, predicting the future is risky at best. One sure winner will be Ethernet because it has more advantages than disadvantages and can serve more applications within the vehicle. This does not mean CAN will disappear any time soon. Rather, it will complement Ethernet as the industry moves toward an electric, autonomous future. At that point, Ethernet might become the sole interface for every vehicle application, but this is still years away.

No bus is perfect

None of the automotive buses, including Ethernet, is ideal for every application. For example, video transferred over an Ethernet network must be compressed at its source to reduce bandwidth requirements and then decompressed at its destination. This requires a fairly high amount of processing power in the camera that in turn could make it more expensive and larger, and the need to compress and decompress the video stream takes time, increasing latency over the link.

In some applications, this doesn’t much matter, but when the vehicle’s cameras are looking for pedestrians in the path of the vehicle, reducing latency is a critical safety issue. Ethernet is also a more expensive and complex physical-layer interface and issues surrounding electromagnetic compatibility (EMC) remain with its two-wire unshielded twisted-pair of wires.

That said, Ethernet offers distinct advantages that necessitate its integration into a mixed-criticality automotive architecture. It supports quality of service, security, time-critical extensions such as time-sensitive networking (TSN), and other capabilities. It is also well suited for the high-performance communication required in a zonal architecture as well as service-oriented communication, both of which are prerequisites for vehicles in the future.

Fueled in part by the rise in demand for driver assist, infotainment systems and technology advancements, the automotive Ethernet market is expected to grow at a CGAR of 20.9% from 2020 to 2026. Source: MarketsandMarkets

To meet the demands of cars that will soon run on many hundreds of millions of lines of code compared with 100 million lines today, the industry is transitioning to an Ethernet-based zonal electronic/electrical (E/E) architecture based solely on Ethernet’s plug-and-play capabilities is uniquely suited to the service-oriented environments that will define vehicles in the future. Devices can be connected and disconnected in real time with no downtime, a significant advantage over CAN buses.

The zonal E/E mandates support for numerous applications, an increasing number of which require not just high speed while handling huge amounts of data, but also extremely low latency. The zonal approach aggregates sensors into a single link from the zonal gateway to a backbone. Ethernet can enable TSN as a solution for the deterministic performance that Ethernet currently does not have and allow fiber to be used as the transmission medium. Fiber nearly eliminates the problems caused by interference, as it is impervious to the intrusion or emission of electromagnetic energy.

This brings the discussion to Flat Panel Display-Link (FPD-Link), a point-to-point solution for high-bandwidth data applications in vehicles, with one high-speed forward channel with speeds of several gigabits per second and a low-speed backchannel for applications requiring less than 1 Mb/s. Using the previous video example, FPD-Link can send uncompressed video to a video display while the backchannel sends data at a lower rate from a touch screen back to the processor generating the video.

The interface’s biggest benefit in such an application is that the circuits for the camera and display are comparatively simple because compression and decompression are not required. And as each link is dedicated, the image quality of one video system is independent of other functions without interrupting video stream on the forward channel. With the ability to support a backchannel and power over a single twisted-pair or coaxial connection, wiring can also be simplified. FPD-Link is not a substitute for Ethernet, but for some applications it may continue to play a role.