Levelling up the Sodium ion Battery 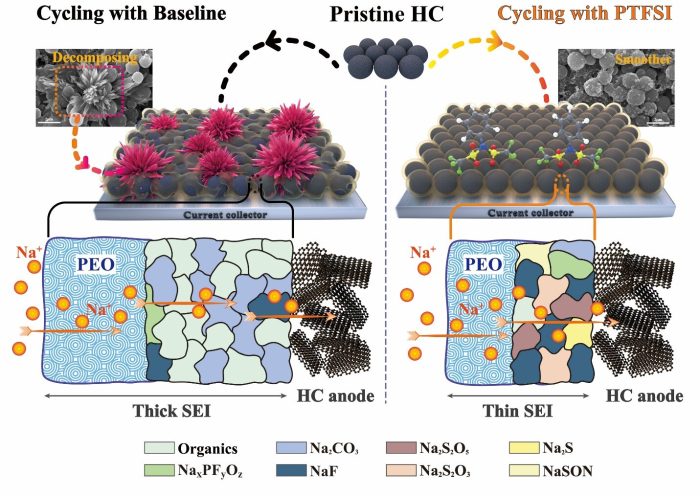 Cheaper and far more abundant than lithium, sodium is increasingly appealing as a foundation for the next generation of high-voltage rechargeable batteries. The development of commercially viable sodium ion batteries lags significantly behind that of lithium batteries, which were widely adopted in the 1990s. But researchers worldwide aim to change that with the hope of eventually creating a more economical alternative to lithium. Advances in sodium ion battery performance could eventually lead to more widespread renewable energy adoption in power grids and drive down the cost of electric vehicles.

One of the major barriers to creating a viable sodium ion battery has been finding a stable anode. Hard carbon currently is the most sodium ion battery common anode, but it comes with the disadvantage of interphasial instability—decomposed electrolytes build up on its surface, increasing the interphasial impedance, resulting in a sharp decline in discharge capacity.

A team of researchers in China tested N-Phenyl-bis(triflouromethanesufonomide) (PTFSI) as a proposed film-forming additive to hard carbon and found that it enhanced the interphasial stability, leading to a 52-percent increase in capacity retention of a sodium ion battery after 100 cycles.

“Sodium ion batteries have only gained renewed attention in recent years,” said Lidan Xing, a professor in the School of Chemistry at South China Normal University and a researcher of the study. “Hard carbon is the most widely used anode material for sodium batteries, but its long cycle stability is not good enough to meet commercial and industrial application requirements. There has been little research on electrolyte matching with hard carbon anode materials.”

The study found that adding PTFSI to the hard carbon anode improves the capacity retention of the hard carbon/Na half-cell they tested from 0 to 68 percent after 500 cycles. “This improvement is profound,” Xing said.

Previous attempts at building a higher-performing sodium-ion battery have included adding a multi-functional nitrogen-doped hard carbon with an enlarged interlayer, and, in another case, developing a carbonized reconstructed lignin as a novel hard carbon anode. Experiments with other carbonate-based electrolytes for sodium-ion batteries have been conducted using fluoroethylene carbonate, succinic anhydride, rubidium, and cesium ions. None of those approaches came close to the improvement Xing and her colleagues achieved by adding a PTFSI film-forming electrolyte additive to the hard carbon anode.

“As a film-forming additive for the anode, PTFSI’s reducing activity is as important as the properties of its decomposition products,” Xing said. “For example, in this work, the structure of PTSFI is similar to that of an FSTI anion, and the structure and properties of their reduction products are also very similar. However, PTFSI is a molecule with a higher reducing activity than the FSTI anion. The former can improve the interphasial stability of hard carbon, but the latter cannot. Therefore, this work provides ideas for the design of hard carbon film-forming additives.”

The research team used coin cells to evaluate PTFSI as part of their new proposed electrolyte sodium ion system. They built the hard carbon anodes using thin copper foil cut to 12mm in diameter, coated and dried, then layered into half-cells with glass fiber separators and carbonated-based electrolyte. Batteries built both with and without their proposed PTFSI film-forming additive were charged and discharged up to 500 times. The authors concluded that significant performance gains presented with a 1-percent addition of PTFSI.

“We observed from this work that PTFSI can significantly improve long-cycle performance of hard carbon. Therefore, the next step is to evaluate its performance in large-capacity porch cells. If the results are similar to those of coin cells, we believe this additive could be used commercially in sodium ion batteries.”