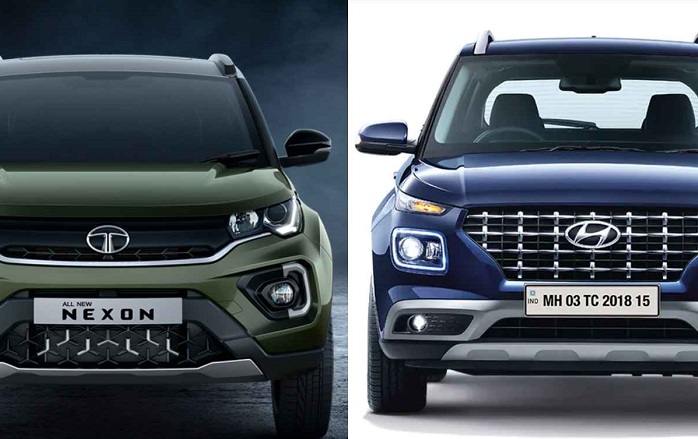 The country’s largest carmaker Maruti Suzuki has firmed up its crown place in the Indian car market for decades. So has the second-largest — Hyundai Motor India. It has been the undisputed second for over a decade, until December 2021, when Tata Motors usurped its well-guarded position. Tata did it again in May 2022, though with a slender margin. Hence the remaining months of FY23 may witness a battle of the Titans for the second slot in the disruptive Indian car market.

The maker of Creta began FY22 with strong numbers, staying ahead of Tata Motors by about 25,000 units in April 2021. Hyundai continued to maintain the lead but with a narrowing difference until November. In December, with the ever-evolving dynamics of the auto industry, Tata Motors overtook the Korean carmaker’s Indian subsidiary by about 3000 units, and again in May 2022 by about 1000 units.

Four years ago, Tata Motors sold 3.13 lakh less cars than Hyundai India. Now it sells just 1.08 lakh cars less than its counterpart. During these years, the maker of Nexon has doubled its market share from just 6.85% in FY19, when it was not even among the top five, to about 12.14% in FY22.

Avik Chatopadhyay, an automotive industry consultant, pointed out two reasons for the scenario. “The first is ever-increasing acceptability of the Tata badge as a result of its product styling, quality, performance and after-sales. The success of the Nexon EV has been a major image booster. The entire experience of owning a Tata vehicle has vastly improved over the last 3 years.”

“The second is that Tata Motors navigated the semiconductor crisis better than Hyundai India did. The ordering and procurement efficiency has allowed Tata to produce more. A Hyundai in India is bound more by what HQ in Korea mandates and therefore can end up losing out for a period of time,” he said.

Analysts tracking the industry suggest that one of the reasons for the narrowing of the volume gap could be the loss of production by the global supply chain constraints during the fiscal, where Hyundai has been impacted a lot more than other OEMs.

An email sent to Hyundai seeking a response went unanswered. However, in a recent media roundtable, when asked, Unsoo Kim, MD & CEO, Hyundai Motor India, said that Tata Motors’ rapidly increasing market share bothered him about losing the position of the second-largest passenger vehicle maker in the country. “Yes, they are growing fast and we are studying them very closely but not worried. We have our own growth plans and we will stick to them,” he told the reporters.

About the uptick in demand and sales, Shailesh Chandra, Managing Director & Chief Executive Officer, Tata Motors Passenger Vehicles & Tata Passenger Electric Mobility, said that the design, performance and safety features of the new models have been the backbone of its success.

According to an industry insider speaking on condition of anonymity, “Hyundai Group is strategically making a move for the fiscal year 2022-23 where it is more focused on brand Kia for the Indian market and wants it to take the lead. It plans to put the Hyundai brand on the forefront next year.”

War of the segments

Amid the existing portfolio of products, in the premium hatchback segment, Hyundai’s i20 has a direct competition to Tata’s Altroz. Since its launch in January 2020, the Altroz has picked up pace clocking sales numbers very close to i20 in FY22.

According to Chattopadhyay, for Tata Motors to take a lead during the fiscal, it would require to maintain the current momentum coupled with more digital enablement during prospecting and purchasing. “The Tata portfolio needs to be leveraged as a complete fleet solution for any corporate, from the Punch to the Safari. The Punch needs to be promoted more at the ground level than taking expensive routes like IPL to ensure sustained numbers.”

“For Hyundai India, getting the supply issues sorted out will surely help get closer to the 50,000 mark every month comfortably. On the brand front, Kia seems to be stealing a lead with the right noises on the EV and tech spaces. The Hyundai brand is getting more ‘mainstream’ like Maruti and that might be a bit of a bother as the customer may not correlate a higher value with the badge anymore,” Chattopadhyay noted.

In the so-called SUV segment, Hyundai’s Venue directly competes with Tata’s Nexon launched in 2017. Interestingly, Nexon, which used to clock around half the sales of Venue about two years ago, has now achieved a feat of selling not only equal but more volumes than the Venue.

Meanwhile, a major portion of the sales in this segment also fall in the kitty of Hyundai’s sister brand Kia with its Sonet model.

Going forward, Hyundai is expected to launch its new model Casper for this segment. The company has also announced that it will be launching the next-gen model of its premium SUV Tucson in the latter part of the calendar year 2022 and is all set to introduce the facelift version of Venue to the market this month.

Hyundai also offers the new-gen Creta SUV which was launched in March 2020 and remains the company’s best-selling model. It competes with the likes of sibling Kia India’s Seltos. Tata does not have a direct rival model for Creta yet.

According to Gaurav Vangaal, Associate Director, S&P Global Mobility, “With improvement in supply chains, Hyundai is expected to bounce back to its No 2 position in FY23. Its Creta and Venue models have huge bookings in the market and at least for now, Tata does not have a rival product against Creta.”

“In H2 2022, availability of chips is expected to improve and new models from both Maruti Suzuki and Hyundai including facelifts will pose a demand headwind for Tata Motors,” he said.

Tata sells the Punch SUV, which has clocked 52,716 units since its launch in October 2021, averaging to approximately 8,500 units a month. And this model does not have direct competition from Hyundai so far.

“On all aspects of customer experience Tata matches Hyundai, Kia, Toyota and Honda. If the Punch manages to maintain momentum and clock 12,000 units every month, then the No. 2 position is definitely up for grabs,” Chattopadhyay said.

In the sedan segment, Hyundai offers the Verna and Elantra along with Aura which was recently launched in January 2020, while Tata has just one product- the Tigor model, available in both CNG and EV.

According to Chattopadhyay, given the Indian customer’s fascination with anything that looks like an SUV, both Hyundai and Tata brands are very well prepared, represented and capable. But Hyundai has a more complete portfolio in India than Tata in terms of having a sedan offering. Otherwise, both are equally strong in hatchbacks and SUVs or SUV-style vehicles.

“Having access to a global portfolio obviously helps Hyundai more in trying out new styles or alternatives to current offerings,” he said.

For the midsize UV segment, Tata’s Safari and Harrier compete with Hyundai’s Alcazar, which was launched in June 2021.

“In the High SUV segment, we are the leader with 35% market share on the back of increasing popularity of Harrier and Safari,” Chandra of Tata Motors said.

According to Vangaal, “Tata Motors has done very well in managing the supply chain shortage this year. However, the company still has a long way to go before taking up the second position for this fiscal year. The two months of exception does not seem to be sustainable as this fiscal year is expected to see a rising competition for the carmaker.”

Tata Motors used to offer its 6-seater Hexa model in the country, however discontinued in 2020 when the BS-VI norms kicked in.

“The one segment where neither has any presence is the MPV, which seems to be growing over the last 12 months. Hyundai surely could look at an offering that mirrors the Kia Carens. Tata Motors has its hands full and for the next 12 months focus will be on its present offerings and on maximizing their potential,” Chattopadhyay said.

Foraying into the Indian market in 1998, Hyundai became a household name in the country while managing to grab a 10% market share in the first two years of its operations. The maker of Santro Xing has enjoyed the number two position in the Indian car market for the longest time now.

Back to history, Tata Motors showcased its peak performance only between FY 2005 and FY 2007 when its market share in the passenger vehicle segment hovered around 16%.

Then this success was led by a focus on products for the fleet segment dominated by “sales of its Indica model with 144,690 units, an increase of 30% and the highest in any fiscal year. The Indigo range posted sales of 34,310 units, Sumo and Safari accounted for sales of 47,893 units in the fiscal, a 26% increase over the last fiscal and the highest ever utility vehicle sales in any fiscal. Safari sales at 15,816 were the highest for any fiscal year since its launch,” Tata Motors had reported.

The high market share then was led by a very different product portfolio of the Sumo, Indica, Indigo and Sumo Gold. The situation today is totally different with the product portfolio clearly catering to the individual vehicle buyer and also at a higher price point. The portfolio in 2004-05 and the portfolio in 2022-23 actually demonstrate the evolution of the Tata brand and its journey in terms of styling, engineering capabilities and customer experience, noted Chattopadhyay.

“The high market share 15 years ago stood on mere numbers whereas today it stands on brand image and differentiated value,” he said.

Domestic sales for Tata’s two top-selling products at the time, Indigo and Indica, began to fall significantly post FY12, when the company’s market share halved and dropped from double digit 11.7% in FY 2013 to single digit 5.4% in FY 2014.

Following this, the carmaker began the rebound and doubled its market share to 8.2% in FY21 and grew to 12.1% in FY22, thereby marking a 3X times growth in the last two fiscal years.

Electric is the future?

For the electric vehicle (EV) segment in the Indian PV industry, Tata Motors is well ahead and has taken a lead, among all its counterparts. After its first EV model launched in early 2020, the company has plans to launch 10 EVs by 2025.

In FY22, sales of Tata Nexon grew three-fold helping its maker leave behind Hyundai’s Creta, to become the best-selling SUV in the country. This was also the first time that a Tata SUV became the highest selling in India.

Tata has recently launched the Nexon Max EV with a comparatively higher range, and showcased concept EV models like Curvv and Avinya.

Hyundai too has strong EV plans, however currently offers only one model – its premium Kona SUV in the market. The company has scheduled the launch of its Ioniq 5 CUV this year.

Moving forward this fiscal, it would be interesting to watch the turn of events with new product launches and strategies to see if the long-enduring carmaker manages to stand its ground or if the new rival takes up the No 2 position by a storm.