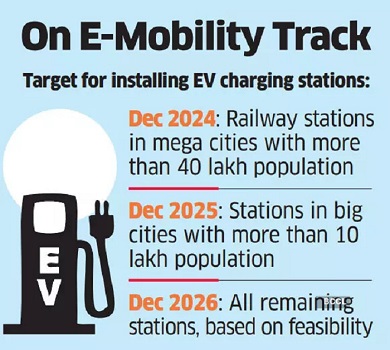 According to a document, the Indian Railways envisages the installation of EV charging stations in Mumbai, Delhi, Bengaluru, Hyderabad, Ahmedabad, Chennai, Kolkata, Pune, and Surat by December 2024, the report stated.

The move is aimed at curtailing the use of internal combustion engine (ICE) vehicles by 2025 for the Indian Railways’ internal use, as it aims to become a net zero carbon emitter by 2030.

The railways have proposed a two-pronged strategy, one to focus on EV adoption, and another on proliferation of affordable and accessible charging infrastructure at railway stations. In the second phase of the plan, which will culminate in December 2025, all big cities with a population of more than a million and other remaining megacities will be taken up.

The Indian Railways will install the EV charging stations on the remaining stations by December 2026, based on feasibility studies by the zonal railways on a case-by-case basis.