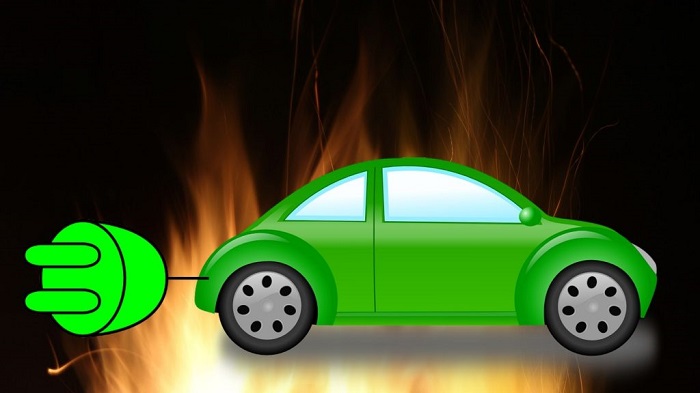 Behind the recent headlines of electric vehicle (EV) fires, engineers are working to get in front of the thermal runaway conditions that lead to battery failure by developing technologies that provide early warning of an impending catastrophe. Some detection platforms are currently in production.

Thermal runaway, a rare but hazardous failure mode in lithium-ion batteries, occurs when oxidation and reduction reactions in a failing cell generate sufficient heat to create a feedback cycle, generating high temperatures and gases. This condition eventually causes the cell to rupture, releasing hazardous, flammable gases into the atmosphere. As one cell vents, it encourages the next one to follow suit, creating a potentially explosive, cascading runaway situation.

EV battery fires are complicated and challenging. In a study of 101 EV fires that occurred before 2019, half could not be attributed to any cause at all, let alone something obvious like damage to the battery pack or overcharging. Equally concerning, some 50% of the fires resulted from spontaneous combustion, and 16% of the vehicles were in neither charging nor driving mode. Often, damaged cells with stranded energy can reignite long after any initial fire. In at least one vehicle incident, a collision-damaged vehicle’s battery pack caught fire four times within a five-day interval following the initial crash.

An analysis of 101 EV fires that occurred before 2019 and their root causes underscores the technical challenges.

“While data has shown that xEV fires are no more prevalent than internal combustion engine (ICE) vehicle fires, the unexpected nature and publicity of these incidents underscore why there is growing concern regarding the amount of energy in these batteries and what can happen when they suffer from abnormal stresses,” said Brian Engle, transportation business development manager for Amphenol Advanced Sensors.

As lithium ion emerges as the new dominant energy storage system for vehicles, industrial devices, consumer products and infrastructure, the industry must find ways to improve safety. While these thermal runaway incidents are rare, early detection of failing cells is critical to protect the safety of xEV occupants, and engineers are developing systems that provide early warning of an impending failure. Such a warning would allow operators sufficient time to stop and get out of the vehicle, distance themselves from a potentially dangerous situation and provide information intelligence of the event that can allow for active countermeasures.

Based on studies of EV fires, traditional methods of monitoring voltage, current and temperature of battery systems cannot provide consistent detection of failing cells before thermal runaway occurs, often resulting in emission of hazardous and flammable gases and even fire. The challenge is to determine when a cell is failing beyond a recoverable state and threatening to initiate a fire.

For the past two years, Amphenol — which has a broad portfolio of sensing technologies — has been working with battery makers, users and companies that develop battery management and stationary storage systems.

Amphenol’s focused on the development of sensor technology to deliver solutions for Robust Early Detection of Thermal Runaway (REDTR) in both mobile and stationary applications. According to Engle, Amphenol is the first company to market with a durable solution that focuses on the decomposition gases released when a lithium ion battery fails.

The development of effective sensor packages for these kinds of applications requires engineers to consider the environment in which sensors are going to be used, the excursions likely to be indicators of problems, and the effectiveness of the detection technology to respond in a meaningful and reliable way.

This usually means that rather than relying on a single class of sensors, combinations of sensors are used not only to treat the broad scope of conditions that engineers are concerned about but also to provide a measure of redundancy that helps to improve sensor reliability.

After a review of research and available sensing technologies, engineers concluded that gas sensors have substantial advantages when detecting thermal runaway, due to their low latency (less than a one- to eight-second response time), their strong signal-to-noise ratio, and the low risk of both Type 1 (missed detection) and Type 2 (false positive) faults.

Gas sensing is also ideal because CO2 and hydrogen are produced early in the battery cell decomposition process, versus an indicator like smoke, which either appears late in the process or not at all. Further, the volume of hydrogen and CO2 released during venting yields concentrations much higher than background, making detection relatively straightforward.

Engineers looked across the sensor portfolio to find a combination of sensors that matched their observations of what occurs when battery cells vent, what technologies worked well and were cost effective. They also assessed each sensor type’s response to analyte (detectable levels of the gas), cross sensitivity, signal-to-noise ratio and aging properties.

The key gases they focused on for detection are hydrogen and CO2.

For CO2 detection, Amphenol engineers leverage the unique light absorption characteristics of the gas. CO2 readily absorbs light in the infrared spectrum at wavelengths of 4.2 microns, a characteristic not shared by any other gas. This physical property can be detected by non-dispersive infrared spectroscopy sensing, which detects gases based on their absorption of infrared light.

For hydrogen detection, engineers developed a thermal conductivity sensor, which senses the rate at which heat is absorbed by a gas. Because the thermal conductivity of hydrogen is approximately 7.1 times greater than all other atmospheric gases except helium, this type of sensor easily detects hydrogen in the environment.

A side benefit was that engineers were able to develop a helium/hydrogen correlation through work with the National Renewable Energy Lab, enabling battery safety engineers to use helium, an inert gas, in testing for their platforms without requiring explosion-proof lab apparatus.

Many of Amphenol’s partners used platforms based on these sensors to monitor thermal runaway events in real-time testing of numerous battery cells, modules and packs. The tests provided consistent, fast detection of cell venting that meet and exceed the capability targets designers established for REDTR.

Previous articleAs EV Market Grows, So Does Push for Higher Efficiency
Next articleBattery Recycling Market worth $23.2 billion by 2025 at a CAGR of 6.1%