EV battery that rapid-charges to full in 15 minutes 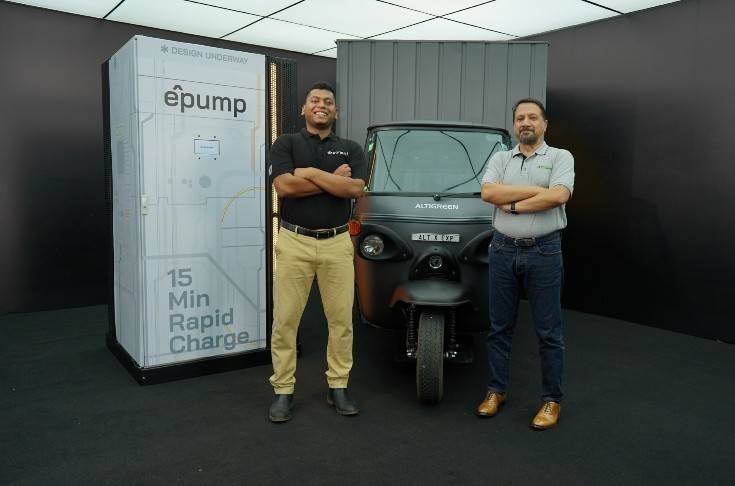 Bengaluru-based Exponent Energy, an energy start-up has joined forces with Altigreen Propulsion Labs to introduce rapid charging technology for electric commercial vehicles. The partners have unveiled what they claim is the fastest charging electric three-wheeler that can be charged from 0-100% under 15-minutes.

The partners have showcased the Altigreen neEV HD equipped with Exponent’s 8.19 kWh e-pack, which provides a claimed city drive range of up to 85km and charges up in 15-minutes at Exponent’s e-pump network. This is achieved by the e-pump delivering 600A of current to the e-pack (15x industry standard) while managing individual cell characteristics including thermals to ensure safety, long battery life, and performance consistency even at 50deg Celsius.

Amitabh Saran, Founder & CEO, Altigreen Propulsion Labs said, “This partnership with Exponent will now make us the fastest charging three-wheeler that offers flexibility and freedom to our customers and helps them earn even more.”

In February, Altigreen raised Rs 300 crore investment led by Sixth Sense Ventures, Reliance New Energy, Xponentia Capital, and others and is aggressively ramping up its R&D and production capabilities while developing a robust all-India distribution network.

Arun Vinayak, Co-founder & CEO, Exponent Energy said, “Our e-pack and e-pump make this possible with 15-minute rapid charging and 3,000 cycle life warranty. By being cell agnostic, we can leverage the existing manufacturing ecosystem that produces LFP and NMC cells extensively, and scale much faster.”

Exponent energy claimed that after 6 months of joint development and on-road testing with Altigreen, the solution has reached maturity to hit the market. Some of the milestones, according to them, include 5 back-to-back rapid charging cycles on a vehicle for a 400km run on a single day and clocking over 10,000km of city driving in a 40-day period.

It has additionally raised $6 million from investors including Motherson Group, YourNest VC, 3one4 Capital, Pushkar Singh, Co-Founder & CEO, LetsTransport. In addition, it has also raised an undisclosed amount from the family office of Pawan Munjal, Chairman, and CEO, Hero MotoCorp. Exponent Energy says it will ramp up its e-pack production and set up 100 e-pumps across Bengaluru in its first leg. Other cities will follow, in association with Altigreen.

Talking about Exponent’s role, Vinayak says “it is an energy network company and our job is to ensure we charge EVs in 15 minutes to deliver freedom and flexibility. We have built a stack that is agnostic to any cell, number of wheels, size of the battery, etc.”

He says that once set up its network will be able to juice up any compatible EV without the need to make any significant change to its existing EV charger. “We have sort of really future-proofed our network to be able to deliver energy, whether it is a two-, three- or four-wheeler. It zero change on the network side.”

When asked about the rapid charge and the potential of thermal runaway, Saran said, “Exponents’ battery pack, the charger, and the battery pack, together, have everything that you would wish for as far as cooling is concerned. We did not have to make any change in our vehicle with respect to any of the thermal runaways.”

Vinayak concludes with, “We always want to ensure that we bring in this battery without too many changes or as close to zero change as possible in a vehicle. We have got a few innovative solutions as to how the battery pack comes inbuilt with thermal management. And we are able to deliver 15-minute charging even at 50 degrees Celsius ambient. To put this in context today with 40 degrees Celsius, we mostly have to degrade charging. If you look at most vehicles. They do end up having a deviation issue with fast-charging or even driving above 40 degrees Celsius,”.