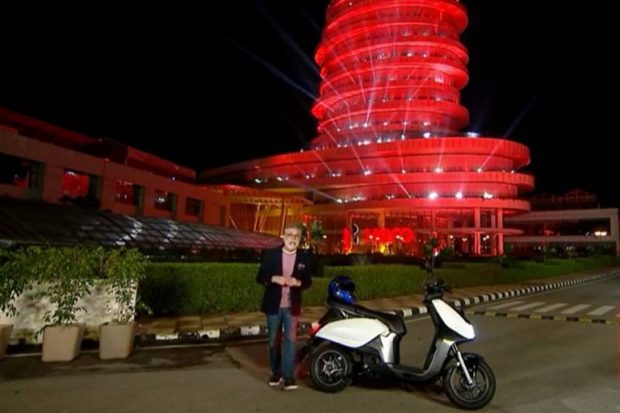 Shares of Hero MotoCorp slid 4.3 per cent in early trade after the two-wheeler giant deferred the launch of its first electric two-wheeler on account of supply constraints amid geopolitical tensions.

The automobile major had earlier announced that its EV, under the ‘Vida’ brand, would be launched in July.

The company said its customer-centric approach, combined with the shortage in availability of key manufacturing components, has forced it to postpone the EV launch till the “festive season” later this year, reports said.

“The ongoing geopolitical situation has resulted in enormous supply chain issues and shortage of various components, including semiconductors. Keeping customers as the top-most priority, we, therefore, feel it would be prudent to unveil the first EV product around the upcoming festive period instead of July as earlier announced,” Swadesh Srivastava, head of Hero Motocorp’s emerging mobility business unit, was quoted as saying in reports.

While lauding the recent steps taken by the government to reduce the central excise duty on petrol and diesel, the company pointed out that the increase in the third-party insurance rates would, however, adversely impact customer sentiment at a time when the industry has just started to recover, as this will further increase the upfront costs of two-wheelers in India.

“It is not usual to have insurance paid for 3-5 years instead of annual renewals, as is generally the case in many countries. The industry seeks government intervention and support in this regard,” Hero MotoCorp Executive Director Vikram Kasbekar was quoted as saying.

Previous articleFord to invest $3.7 bln for production of EVs
Next articleTwo-Wheeler EVs are Set To Raise Fund $2 billion From PE