More
HomeOpinionBlogs & ArticlesHow EV Ready Are We: Report by Statiq 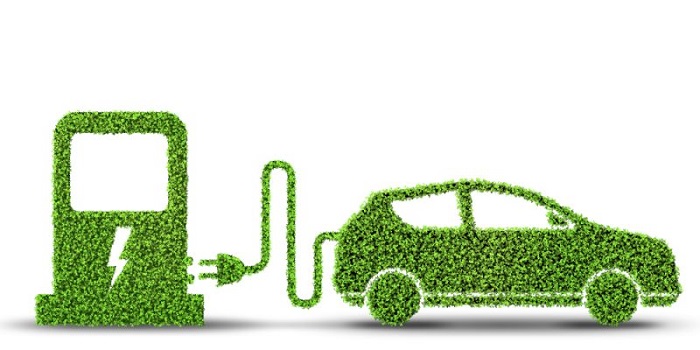 Various governments across the world are committed towards transitioning to 100% sale of zero-emission vehicles, which is an important step towards sustainability goals and decarbonizing the transport sector. Among these nations, India is committed to the 2030 EV Ambition. Over the years the Government of India has taken various initiatives to promote Electric Vehicles. Some of these initiatives include the FAME I Scheme, FAME II Scheme, PLI Scheme, 100% FDI in the sector, and the introduction of the E-Amrit Portal to boost consumer knowledge across various domains. Recently, the GOI launched the budget for 2022 which focuses on clean mobility and energy transition.

Currently, India has 9.13 lakh total registered EVs and the two-wheelers account for the highest share at 49%, followed by three-wheelers that account for another 45%. As per Internal research, there are 1200 fast chargers installed across the country. Additionally, to achieve its vision, the country would require an investment of above USD 180 billion in both vehicle production and charging infrastructure. According to a study conducted by CEEW, around 14.8 million EVs are expected to be sold by 2030 (assuming a BAU scenario of 4% electrification across all vehicle categories) and support infrastructure of 2.9 million public charging points will be required to meet the 2030 EV ambition.

Despite the various initiatives, India is far from achieving its EV dream due to various challenges faced by the sector ranging from lack of charging infrastructure to the high cost of the vehicle. Statiq conducted a primary survey to understand how different groups of people are responding to the need for EVs by deep diving into the challenges faced by them, analyzing their willingness to switch to EVs, and understanding their consumer preferences.

Through this survey, Statiq is trying to understand the on-ground reality of EVs in our country. 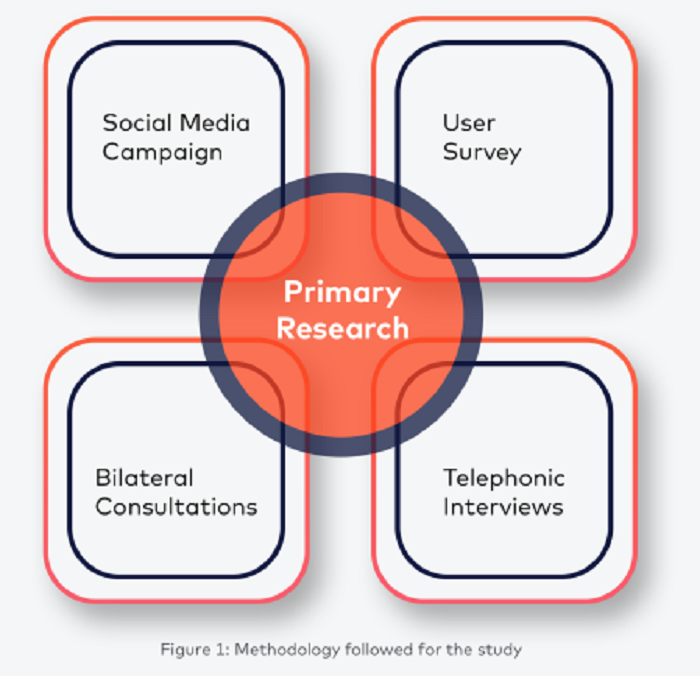 The aims of this exercise include:

The team at Statiq conducted both primary and secondary research to understand the developments and the reality of EVs in India. While conducting the primary research, the team gathered inputs from various stakeholders starting from government organizations to OEMs in the sector.

On the other hand, the team also conducted secondary research under which reports, and research papers were reviewed, and existing state-wise EV policies were studied. This study is divided into two main sections, covering both the storyline of our survey and the role of Statiq in the picture.

While conducting our survey, we have majorly targeted ó categories of respondents starting from government organizations to think tanks to retailers & manufacturers, development financial institutions, and others. Our survey was filled by some reputed names in the industry including Ather Energy, Audi, Tata Motors, Bajaj Auto, and others. The figure below shows the various organizations that have participated in the survey as per the six categories identified.

Our maximum respondents were EV owners, followed by other consumers, manufacturers, and think tanks. Additionally, it can be noticed that 92% of our respondents feel that India will be EV ready by 2030. These numbers can be supported by the aggressive targets set by the Government of India and the various initiatives taken by various players in the industry.

The Government of India has extended the FAME II Scheme from 2022 to the end of 2024. This scheme will help address various barriers by reducing the upfront purchase cost and will boost innovation and provide a broader range of EV models. The government has not only increased subsidies for electric two-wheelers but also plans to introduce a battery swapping policy and has made budgetary commitments towards EV manufacturing and battery supply capacity. Additionally, 19 states in India are already out with their  EV  policies or roadmaps and few other states are working towards it.

On the other hand, private players across the world are committing towards electric vehicles and net zero goals. Some of the initiatives by a few private players include the following:

Amazon aims to have net-zero emissions by 2040; Ikea aims at zero-emission deliveries in all cities by 2025; Zomato an Indian food delivery service company has recently joined the  Climate  Group’s  EV100 initiative and has committed to more than 1ó0,000 EVs. To add, in 2021 many automakers have announced their plans to transition to a fully electric future, for example, Mercedes announced that all newly launched vehicles will be fully electric from 2025; General Motors aims for 30 EV models; Volvo has committed to being fully electric by 2030,  BMW targets  50% of its sales to be fully electric by 2030 or earlier. Lastly, the transition towards electric mobility is not only restricted to government efforts, but private players play an important role in this transition. 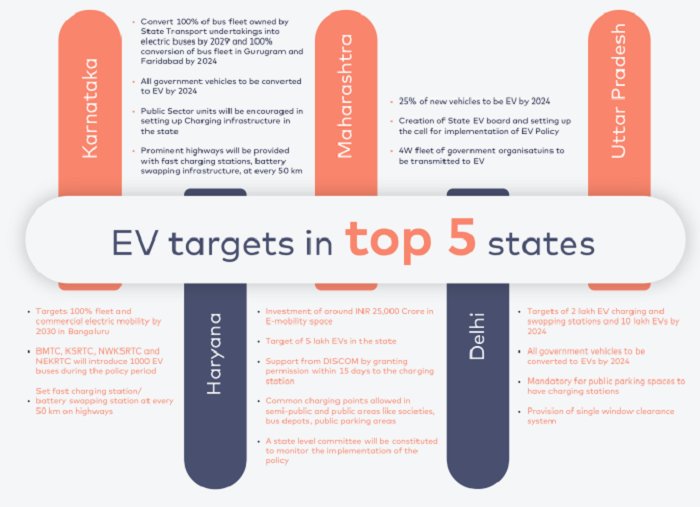 From our analysis, we have found the top 5 states with the maximum number of respondents. These states include Maharashtra, Delhi, Haryana,  Karnataka, and Uttar Pradesh. These 5 states accounted for 80% of the total responses among which Maharashtra accounted for 23% of the total responses, followed by Delhi which accounted for 1ó.5% of responses. The graphic below represents the various EV targets/policies adopted in the above-mentioned 5 states. Additionally, these can act as an example for the other states and can be used by them during the development and designing stage of their respective EV policies.

Understanding the challenges in the EV industry

Deep diving into the challenges faced by various states, we have tabulated the top challenges for a few states covered in our survey and have observed that inadequate charging infrastructure is the most common challenge across most of the states.

Additionally, according to our respondents, a few other challenges exist in the EV ecosystem including a lack of adequately performing EV models, lack of knowledge with respect to benefits, battery safety, and other safety aspects of electric vehicles, end-consumer financing crunch, expensive spare parts, fewer OEMs launching EVs, presence of multiple charging apps and others.

Willingness to Switch to an EV 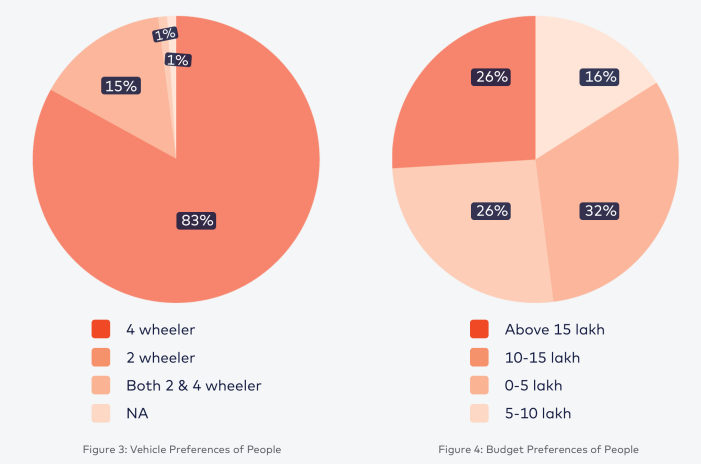 With the given budget preferences of the people, it is important for OEMs to under- stand their needs and launch EV models that can cater to all segments of society. Additionally, according to Deloitte’s 2020 Global Automotive Consumer Study, people are moving away from ICE vehicles globally and 34% of Indian consumers believe that it is the responsibility of OEMs to provide and set up publicly accessible EV charging stations. Another important insight from this study is that   53%of Indians are ready to pay up to INR 1 lakh more for an EV in comparison to an ICE vehicle.

Brand of your Choice

From our survey, we have analyzed the brand of people’s choice for both four-wheelers and two-wheelers and have found that 62.6% of our respondents prefer TATA Nexon EV as the car of their choice, followed by MG ZS EV with 23.3% votes from our respondents.

For 2-wheelers: it was found that 44.3%  of our respondents would prefer buying an Ather two-wheeler, followed by Ola Electric and  Hero Electric with  24.4%  and 22% votes respectively from the survey respondents. To add, we have profiled the top 9  two-wheeler brands for our readers. 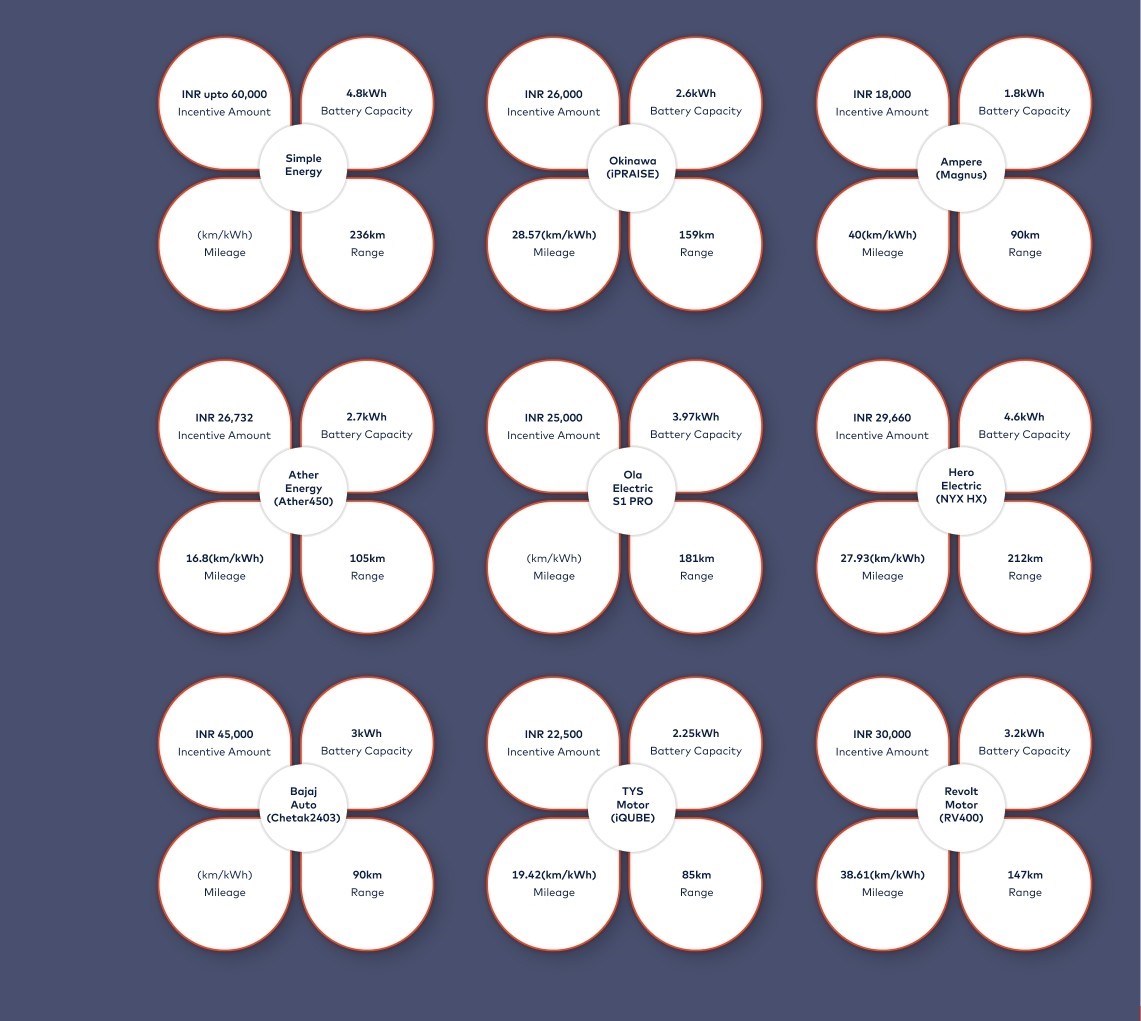 Additionally, the top brands identified above, and the choice of our respondents can be justified through the sales incurred by various brands in FY2022.

We have also captured the sales of a few top 2W brands. It can also be noticed that Hero Electric made the maximum sales in FY22, followed by Okinawa and Ampere. Additionally, Hero Electric witnessed a growth of 342% from FY21 to FY22, and Okinawa and

To conclude, Hero Electric is not only among the top 3 choices of our respondents but is the choice of consumers in general.

From our survey, we also deep-dived into the average expense of people on a road trip of around 150kms and found that 39% of our respondents are willing to spend between INR 500 to INR 1000 on food, beverage, and miscellaneous. This expense incurred translates into revenue for shops and food outlets on highways and is in addition to the revenue generated from charging as a service. 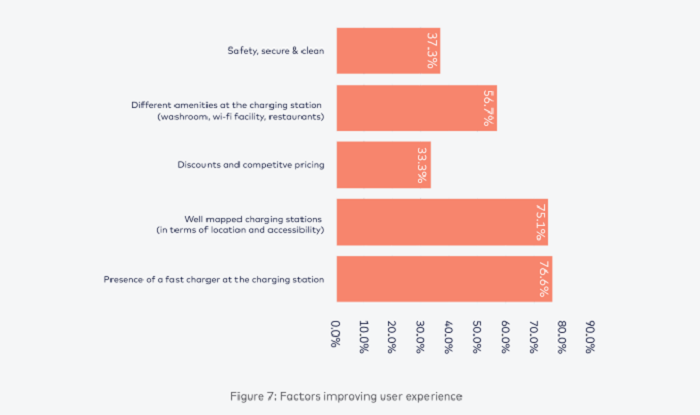 Other than the above-mentioned factors as shown in the graph, a few suggestions were given by our respondents with respect to improving the user experience which includes a single charging application for all types of charging providers, providing dual gun chargers so that it can cater to a larger number of cars in a day. Another important factor that needs to be focused on is to explore cleaner sources of charging such as solar charging.

From this survey, we have tried to understand the various challenges faced by the EV industry starting from accessibility to charging infrastructure to reliable charging experience to affordability. Despite the efforts by the Government of India in the past, there is a need for the Government Agencies, OEMs, and Charge Point Operators to come together and work collaboratively.

Statiq being a one-stop solution in the EV charging  industry, through its continuous efforts is trying to solve various challenges discussed in the study, by providing a reliable charging experience, accessibility to charging  infrastructure, and solving  the issue of fragmented charging networks

Statiq aims to promote sustainable mobility in India and offers various products including Mobile apps, Chargers, and Charger Station Management systems. All the products are designed in-house and Statiq ensures transparency in operations and provides a seamless experience for the end-users.

Sanjana Chhabra is looking into Policy, Advocacy, and Government Relations at Statiq. Her research includes work on sustainable mobility, hydrogen, energy access, and energy transition. She was earlier a researcher with the Council on Energy, Environment and Water, and the ICF. As a sportsperson, she has represented India in many international shooting events.